My dear friends in Christ,

Today, 13th May, Pope Francis is on pilgrimage to the great shrine of Our Lady at Fatima, in Portugal.  The timing is no accident, because it was on this day one hundred years ago that the Blessed Virgin Mary appeared to three children who were tending sheep.  This was the first of a number of appearances of Our Lady to these children, and the thrust of her message to them was the need for penance and prayer, especially for world peace and the conversion of Russia which was in political turmoil at that time and on the point of turning communist.

A highlight of Pope Francis’ visit will be his canonisation of two of the visionaries, Jacinta and her brother Francisco, both of whom did not live to grow into adulthood and died not long after the apparitions.

The third visionary, Lucia, eventually became a Carmelite sister and had a long life. She died at the age of ninety-five in 2005, and her cause for beatification is already in progress.  The authorities of the shrine are expecting pilgrims in their hundreds of thousands to gather for this significant anniversary and the canonisation ceremony.

A remarkable feature of Fatima, and worth pondering, was that the three children were poor and illiterate and, in the words of the Vatican Secretary of State, “how they proclaimed a message of love and forgiveness at a time of war when the talk was of hatred and vendettas.”  We may also reflect, as in the case of St. Bernadette of Lourdes, and the visionaries of Knock in Ireland, how the Mother of God chooses the little people to appear to and to make her wishes known. The heart of her message remains always constant and the same, that is, the need for prayer and penance on the part of Catholics and Christians and how these can change the world. 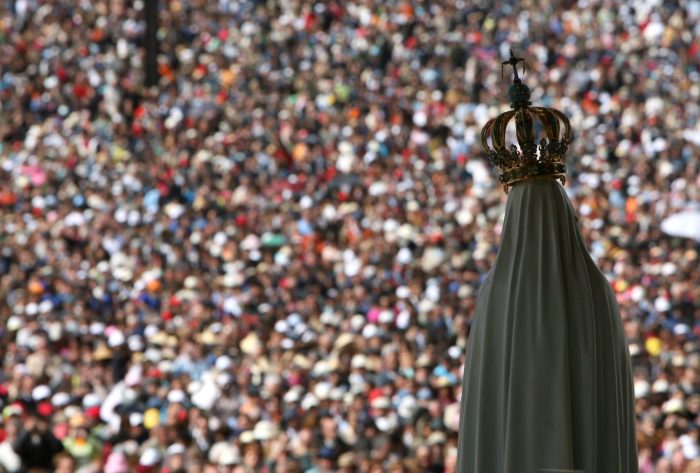 Pope Francis has stated that he will pray especially for world peace on his pilgrimage to Fatima this weekend. He invites all the Church, even if we are unable to be present there, to join him in prayer to Almighty God and the Mother of his Son for peace and reconciliation in a world often riven by conflict, division and mutual suspicion.  The opening words of Our Lord in the gospel were a call to penance and a change of heart, and the appearance of Our Lady to the children of Fatima simply endorsed that call of her Son.  Our prayers and acts of self-sacrifice, even the smallest and apparently simple, can and do make a difference before the God of mercy.

My own recollection of Fatima is of a unique, penitential place of conversion and prayer, different in atmosphere and character from other Marian shrines I know.  I felt it had a simple, almost peasant character to it, greatly loved by those Portuguese people who lived on the land and earned their livelihood from it, like those original three unlettered children.

Let us then go in spirit to Fatima today, joining the Holy Father in prayer for all his intentions, and aware in faith that the prayers of each of us do matter.  May the two newly canonised saints, and Our Lady of Fatima, accompany us in the Diocese of Lancaster and us all with their prayers and intercession!

Keeping you in my prayers,

Until next week, May God bless and protect you all,